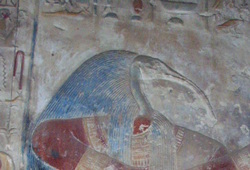 
Many excellent books have been written on this subject and I cannot hope to do it any justice by trying to describe it fully here in this limited space.

Hermeticism is part of Western Esotericism, studied academically in France, Holland and the UK - academic authors I would generally recommend are W. Hanegraaff, N. Goodrick-Clarke, J. Godwin and also G. Lachman - non academic, but excellent researcher and very readable author on the subject.


The mythic figures of Thoth (the Ibis-headed Egyptian God), the Greek God Hermes and the Roman God Mercury are all combined in the synchretic figure of Hermes Trismegistus, 'Thrice Great', from whom the word "Hermeticism" derives. The Corpus Hermeticum is among the few Hermetic textbooks that survived from ancient times. Hermetic authors are likely to have been many, but the philosophy contained in the books seems to be consistent in all writings, whichever their true age.


Some scholars doubt that this knowledge is as ancient as many claim, dating it to the early Ptolemaic period in Egypt instead. Leaving aside academic debates, in essence Hermeticism, like Neoplatonism, celebrates the dignity of individuals and rises them above the status of sinful creatures, placing them on a par with Gods themselves. What is emphasised is that individuals are both human and divine - both parts of one's nature must be cultivated, so as to be able to function within the limits of duality, but also able to transcend one's limits. Hermeticism seeks oneness with All That Is for very practical purposes and, unlike other spiritual and religious philosophies which diminish the body, Hermeticism encourages embodied spirituality.


Natural magic, astrology and personal alchemy (transformation and elevation of one's nature) are part and parcel of the Hermetic ways of seeking knowledge, including knowledge of the world we live in and other multidimensional realities. A gnostic form of direct learning by experience is encouraged. Hermeticism encompasses the belief in the reflection and direct correspondence between microcosm and macrocosm ('As above, so below'). It also teaches that one's inner reality matches one's life circumstances ('As within, so without'). In essence, one's thoughts and attitudes have a powerful effect on one's life and self-observation is greatly encouraged, so that one's thoughts and attitudes can be noticed and, when necessary, redirected towards more positive directions, energies and purposes.


It is also interesting to note that the most famous Hermetic motto, "Know Thyself", was found inscribed on Apollo's temple at Delphi and recited by the Pythia, the oracle, in the following terms:


My advice to you, whoever you may be,
Oh you who desire to explore the Mysteries of Nature;
if you do not discover within yourself that which you seek,
neither will you find it without.
If you ignore the excellence of your own house,
how can you aspire to find excellence elsewhere?
Within you is hidden the treasure of treasures.
Oh Man! Know thyself, and you will know the universe and the Gods.

The Oracle of Delphi